For The Good Cause of Naughty Nurses

So, Jenny over at Mama Drama had a post today about hunger. Specifically, how we can help.
The Hunger Site has a special little yellow button you can click and they will donate food (at no cost to you). You can read more about that in Jenny's post, so go on and read that and then come back because I'm sure you want to know about this Naughty Nurse thing. Right? Right.

So, if we can get 200 people to post and say that they clicked, Jenny is prepared to don her Naughty Nurse costume just for the internet. (Boy there went my stats because you know how many hits I'm going to end up getting for typing Naughty Nurse? I would guess as least as many as I get for 'she had worms in her').
Even better, Jenny has agreed to accept comments here on my blog that say they clicked. But hurry up because it only counts if you comment by tomorrow night!
So go on, get clicking and commenting and spread the word!
Posted by Mrs.X at 3:23 PM 6 comments:

Weirdest Of The Weird

I know this may be sort of cheating, but I'm lazy. So.... meh.
Anyway, my MIL is notorious for the strange and occasionally inappropriate things she gives as presents. I thought there was no better way to really get into the holiday spirit then sharing them with you.


1) First up is the shoe holder she gave David for Christmas last year when he was 1. In the box there was a baby's 1st Christmas bib (it was his 2nd) and this scary ass clown that I couldn't give away for free at our yard sale.
The most frightening aspect to me is the real hair used for eyebrows. 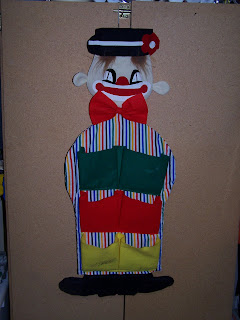 2) The much mentioned bedazzled bird barrette. I'm sorry that I don't have a picture of it. If I could remember which grave belongs to the sparkly little sparrow, I would dig it up and show it to you. I'm still not entirely sure that that bird hadn't at one point been alive.

3) The pants-less and used Spongebob Squarepants pillow given to Breanna. It was stained. And smelled funny.

4) The Christmas card she filled out after we gave her our annual gift of cash.
*side story*- We once bought her a digital camera (which she broke less than a month later) for Christmas. We were out of town visiting family and she came into our room (without knocking) at 3 am to ask for batteries for her camera. Not that this is a strange request but what really disturbed me was the thought of just what she was trying to photograph at 3 am.

5) A used floral print photo album. Empty, with the exception of the photo of Henry. I don't know who Henry is but based on the powder blue suit and stooped posture, I'd say Henry had a hard life.

6) The lighted moving picture of Baby Jesus given to Bre.
There is simply nothing more to say about that. 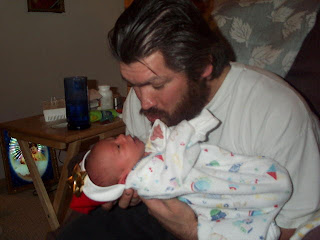 You can just see it towards the bottom left of the picture. Baby Jesus with the angel watching over him.

*side story*- My MIL actually has several lighted moving religious pictures in her house. This same baby Jesus one, Jesus on the cross, Mary, etc. She also has several statues and crosses adorning the walls, mantle and floor in her front room. None of this would be to terribly strange except that in the center of this plethora of religious items, is a ceramic statue of Porky Pig. A pants-less Porky Pig with a beanie hat. And the statues on either side are praying to it.
There are some things that are simply beyond my understanding.
Posted by Mrs.X at 12:48 PM 1 comment: