Preparing For the Future 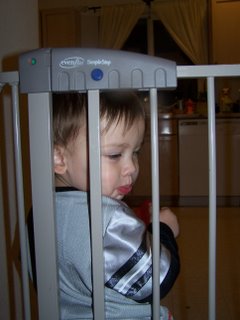 He shakes the gate and giggles like a mad man. He will not leave the kitchen. Not even for Elmo. And for this child to not even be willing to leave for Elmo? That's pretty damn serious.
So, being the encouraging mom that I am I decided to help him out.
We didn't have any empty tin cans, so we had to settle for a plastic bowl. 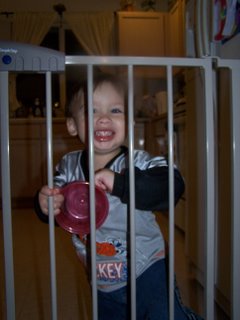 And it started out as such a promising day! Hurricane napped, Girl smiled at me, I had things under control for the first time ever.

But. Ugh. I had to take Girl to the doctor the other day and she had to get this parasite test which involves me playing with poisonous chemicals and poo. Yay! Fun! And it's not even my birthday!

About 2 minutes before we had to leave for cheer practice, Girl had to go. I sighed and gave up actually being on time since I knew I'd have to do the test and get it over with.

The first container was no problem. Gross, but done.

The next container? It decided that I was a fucking joke and balancing? Ha! It laughs at my whole 'let's balance it here on this perfectly flat step stool' and does a cartwheel into my lap and oh my damn! That label said carcinogens and poison and now it's sitting in my lap! Dammit!!

I did the perfectly normal thing and freaked right the fuck out.

I ran into the laundry room, threw off my pants and scrubbed my legs with soap. I scrubbed up the floor and then threw out the washcloth because who the hell wants to use that thing again?

I ran up to tell Mr X what happened, you know, just in case I fell over and died at least he would know why. He was all "yeah, OK. You're fine." Which? Wrong thing to say.

I gave him the look of death, he laughed and off to practice we went.

As soon as practice was over, we ran into the lab to turn in the one sample I was able to get and tell them I was dying.

The guy yawned, handed me a new container of poison (seriously? What the hell? I thought hospitals wanted people to not die), and said 'OK'.

"But, um, what about the bottle I dumped in my lap?"

"Do I need to be worried or anything that I just dumped a carcinogen in my lap?"

Oh I don't know, I thought it'd be fun. You know, I'm a wild and crazy lady like that.

"Is there anything for me to be concerned about?" (I thought maybe the usual sarcasm would be a bad idea right now).

And yet, somehow, I'm not really feeling reassured by that.

To make myself feel better, I told Mr X that I was going to have to get a series of shots and our insurance wouldn't cover it. Now how long should I wait before I tell him I was kidding?