As usual, my very best intentions have been thwarted by a furry red muppet bastard and his number one fan's sensitive nature.
It seemed like a wonderful idea. A sprinkler made just for babies and toddlers in the shape of Elmo. It sprayed a very fine mist in a rather non-threatening (and thankfully not giggling) manner.
But much like his first encounter with the giggling (and yes. I just now, months later, discovered that those Elmo heads giggle when squeezed. So great, now Hurricane can listen to Elmo giggle maniacally while the muppet gobbles up his toes. Fabulous.) slippers, it did not go as expected. 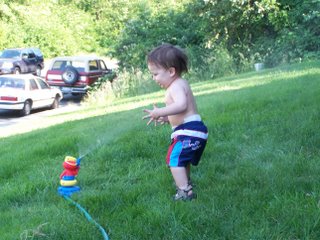 LaLa my dear friend! It's raining! Come inside with me and
we'll eat cookies and plot to destroy Cat! 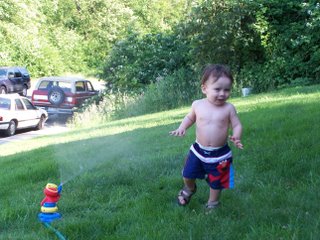 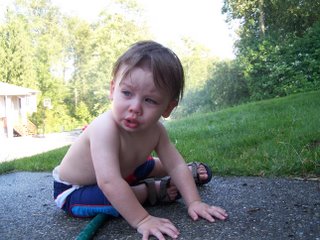 What the hell mom? What did you
do to my friend?

Ugh. He wanted no part of this thing that spit at him. He sat on the side walk and cried La La Nooooo.......

And in case I didn't already understand just how very strange a boy he was, he decided to reveal his fear of the alphabet.

It started simply enough. I began the afternoon, after he wakes from his nap cheerful and angelic (shut up), as I always do. With a cheerful, if a bit (shut up) off key rendition of the ABC's.

He whimpered when I reached C.

Rubbed his eyes and threw himself into a heap of warm angst in my lap at H.

Covered my mouth and pleaded for me to stop at M.

Began to cry at P.

R made him yell 'NONONONO!' as he covered his head.

By W he was red-faced and tear streaked, gasping in agony.

I couldn't believe that it was the song that had caused him to react that way.

I tried to sing it again but didn't make it beyond B.

I thought maybe he was turning into Simon Cowell thanks to his father's secret addiction to American Idol.

So I sang Twinkle Twinkle Little Star (it has the same tune as ABC), and he clapped and smiled.

I waited until Mr X got him.

I made it to D before his little body burst into flames and the letters simply smothered him.

Mr X tried to sing it for him.

He was immediately tackled and bludgeoned with a Weeble.

I am not sure what sort of falling out my son has had with the alphabet. Only that it was so severe as to have caused their banishment.

Sesame Street has never been so sad.