I think this may become a regular thing. These Random Bits, I mean. There are times where I just have all this stuff to say, but it's not really enough to spew out a whole lame post. Instead, I like throwing it all together to make one really long boring post. Isn't that nice of me? Now you only get one lame and lazy rant instead of 6. And I like to babble and this makes it easier.

* See how he's about to swallow that entire block? Didn't I ever tell you that we don't feed him? I gave that up. It was part of my New Year's resolution. The part where I vowed to longer chase him down the hall with a spoon and a bowl of cereal. Instead he eats blocks. And Cat. And occasionally the bits of cocoa puffs Girl X trails across the floor while playing Hansel and Gretel. 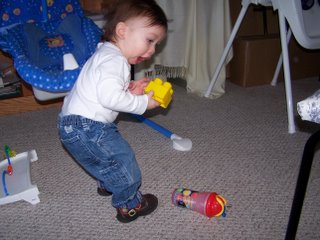 I don't need no stinkin' yogurt! She neglected to tell you that she has hidden vegetables (VEGETABLES!) in my yogurt. Dude! That's so wrong.

*I am anxiously anticipating this weekend when we will be setting up Girl X's bedroom. There will be swearing. There will be injuries. I dare to hope that there will be blood. Because, you know? It's not worth it if there isn't any blood shed. I have my trusty rusty screwdriver ready to go.

*Mr X bought a stationary bike this weekend so that we could work out but still be lazy because that's just the perfect kind of exercise when you can sit down and watch TV and burn calories. After my first attempt I realized a few things.

1) Even riding a bike, I look like I'm having a seizure as evidenced by the fact that Girl X took one look at me and started crying because she thought I was sick.

2) I must sit on a pillow while riding that bike because the seat is like a rock, a narrow rock, and my ass? It huuuuurrrrtttss.

3)If this has been a real bike, I would have fallen off several times. The only reason I didn't fall off of this one? The couch kept me propped up everytime I slipped.

*I need to get out of this house. And away from the kids. Because? I got excited at the thought of shampooing the carpets this weekend. I think there should be alcohol involved. Actually, I'm starting to like this idea. I mean, my neighbors already think I'm a drunk so it wouldn't surprise any of them to find me shampooing my driveway while holding a martini. And I have never had a martini. I want a martini. I think. Uh-huh. I want to at least try one. And I bet I'll be drunk after one. In fact, I doubt that it would take the whole martini. But it would make shampooing the driveway a lot more interesting. I'm actually a little concerned about shampooing the carpets because I've never really done it before. We have a shampoo thingy but it does nothing except belch loudly and spit water. I'm going to rent one and hope I don't break it. And also? Hope I don't end up shampooing my foot. Maybe I better wear shoes. Because when I do shampoo my foot, and I probably will, at least I can get my shoes clean at the same time. It's called multi-tasking.

* I told Mr X no Valentines presents. I tell him this every year because our anniversary and my birthday are just around the corner, and Valentine's Day always reminds me of 2nd grade when this kid Mike wrote me a dirty Valentine that got him kicked out of our class. So it was nice when Girl X gave me one and then Hurricane offered to pick my nose for me. And by offered? I mean I bent over for a kiss and he jammed his finger into my nose, poking my brain and laughed. 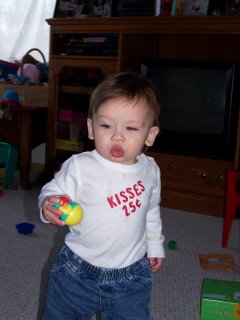