Tonight we thought it would be fun to go out in public and unleash our special brand of crazy on the world. Or at least the dinner crowd at an upscale pizza place (seriously? How upscale can a pizza place be?) and have dinner with some friends.
Yay! More chances to broadcast my social awkwardness!
This was the first time I'd ever met B and T in person (they live in Texas), but I've known M (in 'real' life) for a few years. At least she had some clue how this was going to go. If she didn't, she was quickly reminded when our drinks came and I had 2 straws. I told Girl X is was so that I could stick one up each nostril and just suck it in.
I managed to refrain from giggling everytime B said "y'all" (and I've realized how stupid I sound when I say it because you should really only say that if you're from the south).
Once seated (in the loft area where we could look over and see everyone else. This is important to remember in a moment). I tried to amuse Hurricane. First, he threw his crayons across the floor. Then the book.
I thought that if anything was going to work, it would be the Weebles. The very same Weebles he beat his sister for touching.
I handed it to him.
He looked at me.
He threw it in my general direction but missed.
I watched, in frozen horror, as it went over the balcony. I heard a crash and some excited voices.
I was so ready to climb under the table and never come out but Mr X wouldn't let me.
Thankfully, the Weeble didn't hit anyone. Also? Hurricane didn't cause the crash. In what can only be described as excellent comedic timing, his Weeble landed just as her son through his plate on the floor.
I put the Weeble away.
Girl X smiled and went back to coloring.
We only had to curb our conversation once because I didn't think it would be cool if Girl X went to school and started telling everyone how her mom's friend's coochie had crabs.
Now might be the time to mention that Coochie is a cat and it's a stuffed crab. Just so you don't think we have completely inappropriate conversations with small children at the table. We save those for after they go to bed.
We had ordered breadsticks for Hurricane's dinner which he nibbled. Mr X had planned on sharing his dinner with him. In all, he ate a breadstick, a slice of pepperoni pizza, a chunk of calzone, half a container of mini M&M's and he drank all of his milk.
This was all after the discussion we had about how he picks at food at night.
We also learned that M is an alcoholic glutton. When the bill came, hers totaled $200, including 2 pitchers of beer (which she never shared!). And she is just going to love that I shared that.
I suppose I could explain.
Nah. 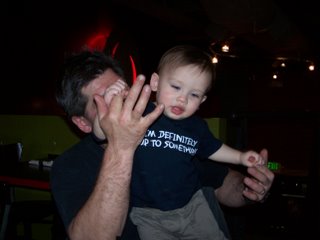 I just gotta' dance, y'all! 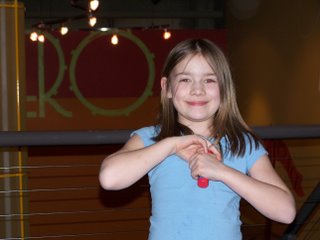 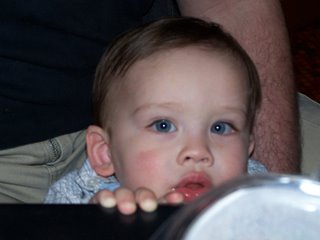 Ok, M. I think most people can totally figure out that you got the wrong bill. :)

Because All the Crazy People Are There

We went to my niece's birthday party this weekend. I hate going over there. I love my niece's, but my sister-in-law and her family are just plain crazy.
Last year, her mom cornered my while I was nursing Hurricane and started rubbing my belly. I have no idea what the hell that was about. I see her maybe twice a year and she's rubbing my belly? I don't even let Mr X do that and I married him. Once she started asking me questions about my sex life I knew I had to get out of there. I muttered something about nuns and ran. My socially awkward self was not ready for that.
I had fully expected this to be just as strange since my MIL would be there and my favorite SIL planned to introduce her new boyfriend then. It was to be my job to run interference. In exchange, she would make sure crazy toucher would stay away from me.
MIL pretty much ignored new boyfriend. She relayed all of her questions through SIL even though he was sitting right next to her and for once, she was speaking English. But this is 'normal'. I was fully prepared to direct new boyfriend to the pretty punchbowl the minute she started talking about big boobs. I think I was a little disappointed that she didn't. Or maybe she saved that for after we left.
Crazy Toucher stayed away from me and just as I was beginning to fell relief, Cake Man came along. My sister-in-law's dad. Usually unnoticeable in the shadow of Crazy Toucher, he is extremely loud and annoying. When he came at me with a plate of cake, all I could do was sigh.
"Have some cake." Notice it isn't a question. He was all up in my personal space yelling, and spit talking.
"No thanks."
"Have some cake." The hell??
"No thank you, I don't like cake."
"Have some cake."
Right. I know he's not deaf. I'm not scary skinny and in need of food so again.... The hell?
"I don't want any but MIL does."
"Have some cake."
"Great cake! Thanks, just what I wanted!"

Well, what the hell was I supposed to do? It was take it, or risk the attention of crazy toucher.
I dumped the cake on some very happy kid.
From then on every time I saw Cake man he'd ask me if the cake was good.
"Oh, yeah. Best cake ever!" In my best I'm-pretending-I-was-a-cheerleader voice.

On the way home I asked Mr X why we go to these things.

"Because all the crazy people are there and they all like talking to you. What could be more fun than watching that?"
Posted by Mrs.X at 9:14 AM 1 comment: