The best part about Labor Day weekend is the knowledge that at the end of it, school starts. Yes. As of Wednesday Girl will be back in school thereby saving us the hours of my lameness and her exasperation at my ill-planned attempts to be cool.
We celebrated Sunday by going to the All-American traditional cookout. With dogs. Ours, theirs, others. Mishka was reunited with 2 of her litter mates and they spent the entire afternoon and evening rolling, nipping, sniffing and flipping each other.
We watched and ate and interacted with other adults which? Seriously? Was it always that good? Because I'm almost certain that I didn't say anything to horribly stupid (minus the idiotic conversation I initiated about Hurricane's rash and the subsequent switch to cloth diapers which no one cared about so I shut up and we moved on). We laughed and talked and I didn't feel entirely out of place for once. 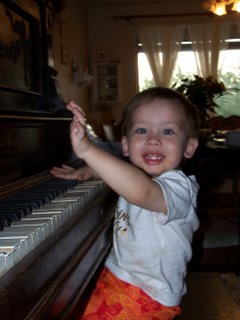 Hurricane loved the piano but was less certain of Her. But she loved him. She hugged him and kissed him and anytime they came within 5 feet of each other she felt compelled to put her arms around him. 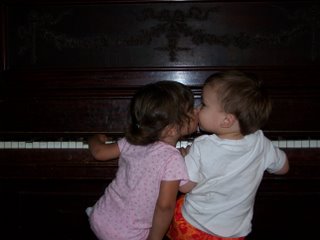 Her father insisted that she immediately go to her room and remain there until she is 30. She is a beautiful little girl with liquid chocolate eyes. Her parents are doomed. 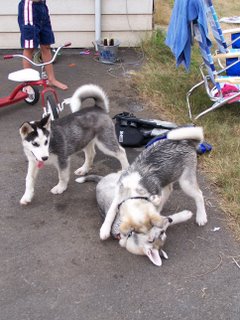 Mishka is one of these dogs but I'm not all that sure which one. I know she's not the dark one in the back. 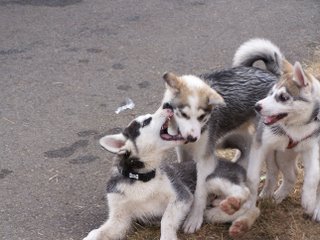 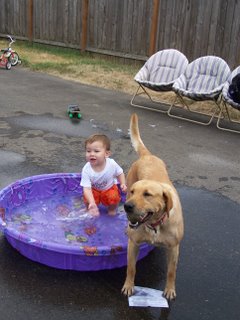 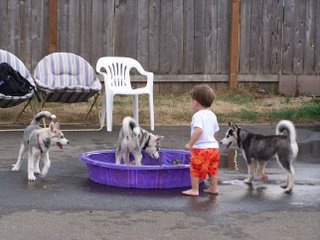 Here is where Hurricane became enraged. Because puppies? Totally cute. Puppies in his pool? No freakin' way! He stomped into the water yelling and waving his arms calling them all 'Eeka!' (his name for our puppy) and surprising them enough to chase them off.

Satisfied, he stepped out and stood guard at the side.

This morning I gave him a bowl of cereal. He took two Apple Jacks and refused the rest.

At lunch I handed him a peanut butter and jelly sandwich. He sniffed and walked away.

We went out to eat dinner. Girl happily munched her chicken fingers (I don't think she's ever ordered anything else) and looked doubtfully at Hurricane's chicken quesadilla.

He stuck his crayon in it.

He laughed and merrily refused to eat.

How can a child subsist on 2 Apple Jacks?

At the risk of regretting saying anything at all, at the risk of being a fool given our past difficulties, we finally reached a definite decision about having more children.

Here's to trying, ignoring the failing, hoping for the best.