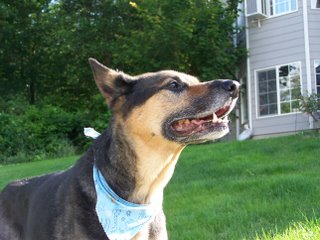 In our marriage, Mr X is the Big Spender. EBay is my personal nightmare. I am on a first name basis with the UPS, Fed-Ex and USPS drivers. They bring bones for Dog. I think they fear that he will bite them. I have had to refrain from telling them that they need only fear leaving in need of a towel from the shower of drool he wishes to bestow upon them.
I like to save our money for things like, bills. Food. Clothes for the kids. College. Extra money that could be put towards savings. Oh Savings!! Screw Brad Pitt, in my fantasies the knight on the white horse is a padded savings account. And while we have one, I always look at it and think about how long it will be before we can pad it just a bit more.
Mr X likes EBay. He sees that little Buy Now! button in his sleep. I woke him up last night because he was laughing in his sleep. He had been dreaming about buying The Packers on EBay and he had the winning bid. I'm not entirely sure how to react to the reality that he was more excited about having the winning bid than the Packers. I don't think he even noticed me making out with Brett Favre.
Which perhaps explains his inability to walk away from the tricycle at Toys-R-Us that we really didn't need yet but he had to buy because we had a $5 off coupon and it came with a free movie pass! So what if it cost $50 and I could have possibly bought 2 of them and Hurricane is 18 MONTHS AND CANNOT EVEN REACH THE PEDALS.

So, we bought a tricycle. And then thought maybe it's be funny to teach him to ride it. Except that, you know, he can't reach the pedals.

First up: Mental Preparation.
I am the tricycle! I am tough! I am MEAN! GRRRRR! 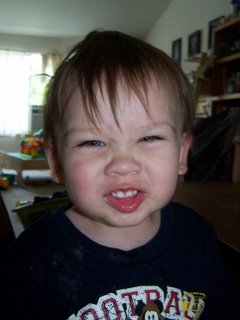 I know it's kind of silly to put a helmet on a kid on a tricycle, but this is Hurricane. And about 2 seconds after this picture was taken, he fell backwards off the bike and landed on his head. 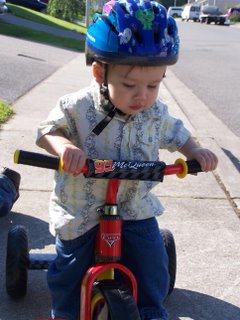 Here he is concentrating on using his mind control to make Daddy push him up and down the street for 45 minutes.

Round 1- He scooted off the seat and walked the bike down the sidewalk. scoot scoot shuffle

Round 2- Sat him on the bike, physically placed his feet on the pedals. Feet do not reach the pedals.

"He'll grow into it! It's not too soon!" Mr X declares as he attempts to streeettccchh Hurricane's legs to the pedals.

And Hurricane rewarded him with a kick because he got pulled off the bike seat.

Round 3- Mr X gives up and resigns himself to walking hunched over for the next 6 months as he pushes our son up and down the hill. 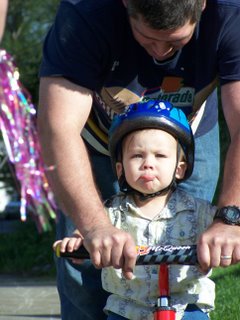 Next week, we take the training wheels off of Girl X's bike and I get to take pictures of Mr X running behind her, holding onto the seat as she screams at him not to let go. This is immediately followed by her leaping off the bike while Mr X continues to run.