First, my apologies for this entry will most likely suck. Because it is full of pictures but I am getting a stye in my eye and I am a very big baby and it huu-uurrrrttss!
Sunday we took the kids to the nearest pumpkin patch, for it is a requirement, nay (I can't believe I just used the word 'nay' in a sentence. Next I will be saying things like 'thy' and 'thou' that's about all I can think of for now but I am sure there are more.) the law, according to Girl who is nearly 9 and knows everything, that parents take their kids to a pumpkin patch so that we can all trudge through mud in the cold getting whipped in the face with corn husks.
Actually, it wasn't that bad. At least it was ok before we learned that Hurricane? He does not like hay rides, pumpkin guts, corn husks or caterpillars. Or cameras. 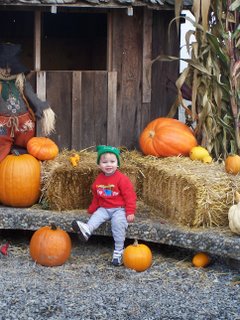 In the very brief moments before Hurricane realized that this little outing would involve scary machines and bugs. 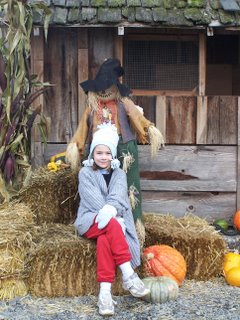 I have no idea where she learned to sit like this. Doesn't it look all proper? She absolutely does not get that from me. Also? I did not help her pick our her clothes. Her dad did. This explains why she is wearing red sweatpants that are too short for her, her blue tweety bird pajamas, a dark blue sweater and my gray granny cardigan. This is a step up from when he helped her get dressed to go out to eat in her pink skirt, purple knee-highs, red 'know it all' shirt and yellow rain boots. 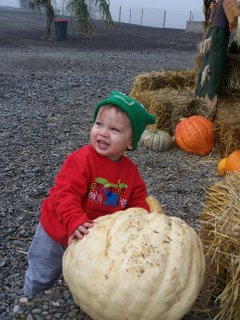 Every time Joe would lift a pumpkin, Hurricane felt compelled to do the same. Even if he couldn't move it more than a few feet, he still grunted and made his Hercules face (oh come on, don't tell me your kid doesn't have a Hercules face! Or that you didn't have one as a kid. And I know some of you still do it) and when he was done he would stand up, stretch and smile, completely satisfied that he was the strongest boy with in a 2 foot radius. 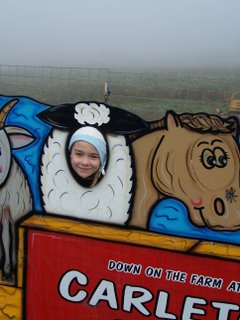 This was the highlight of the day for Hurricane. He would walk to the front and knock down the animal faces making their noises as he went.
Baaaa..... buck-buck-buck......niegh......moo........ 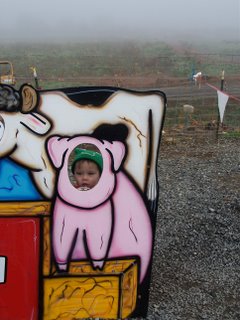 Roooaaarrrrrrr!!!!
People? What the hell kind of scary ass farm has he been on that pigs growl and roar? 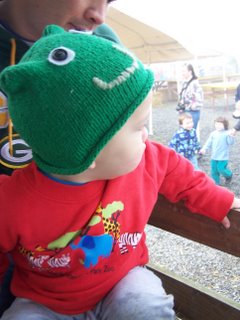 This still has me flummoxed (yeah, I said it. First nay, now flummoxed. I am a cartoon character). Hurricane loves tractors. Tractors, bulldozers, trucks. He loved the tractor that pulled the wagon we were sitting in.
And then it moved and he decided that maybe he doesn't like tractors so much after all.In fact, maybe he thought tractors sucked and perhaps that it was going to eat him because it was loud and those tires were big and moving and what the hell were his parents thinking?
Then Joe started making fart noises with his mouth and all was right with the world again. 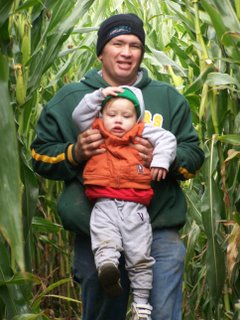 Well, it was alright until Joe decided he couldn't go running through the corn alone and then it just sucked again. 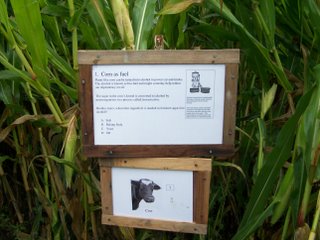 We only got lost 3 times (we had a map and still, we got lost). We answered the little questions and solved the riddle.

The questions was "How did the farmer get lost in the corn maze?" 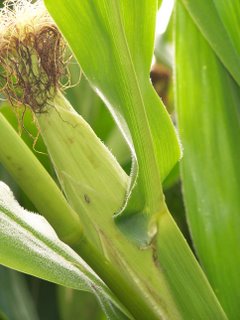 The answer? "He got CORNFUSED!"

Joe and I laughed thinking Girl would totally go for that. It was her type of lame joke that she would have shared with her grandpa (he told us a lot of incredibly lame jokes when we were kids).

Instead she rolled her eyes and declared that that joke was not funny. At. All. 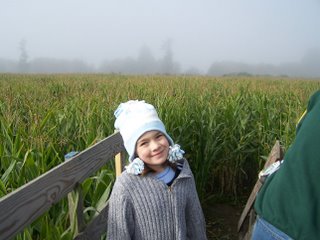 When she finally did laugh it was because I tripped coming up the stairs to see out over the maze. 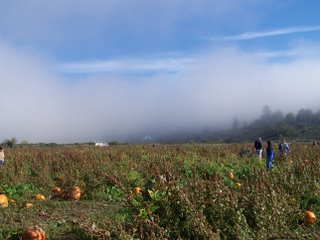 When we finally came out, most of the fog had lifted, it was finally a little bit warmer than death, and their were pumpkins to pick. 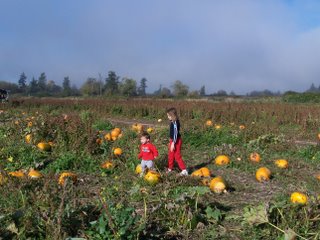 Again, it was great. At first. Then Hurricane came across his first smashed pumpkin. He stared down into the guts, the seeds, the carnage! This was too much for his young sensibilities and he burst into tears screaming 'no!'. He refused to pass any pumpkin guts, only slightly mollified when we would lift him up and over, beyond the mess. 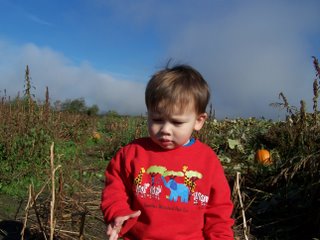 We started to walk back up to pay for our intact pumpkins (no way were we going to try the tractor again, thank you very much). It was then that Hurricane noticed the camera. 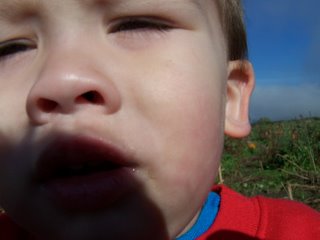 He pushed the camera straight back into my head. It seemed as good a time as any to put the camera away.