There One Where I Puke

I once found half a spider in a bowl of soup. Thankfully, I found it before I actually ate any of it. It has not helped my food pickiness at all. I refused to even try Caesar salad for 4 years because of the smell. And then there's the thing with the olives (which I craved while pregnant with Hurricane and oh it was awful with the 3 am battle with my belly. I had to close my eyes and pretend they were grapes because Hurricane DEMANDED the olives and he had control) which I will never live down and my brother likes to torment me with when we visit (he puts them on his finger tips and taunts me with 'I see you!!' and totally skeeves me out). I only like pizza with very little sauce and very thin. As a kid I told everyone I was allergic because I really hated pizza. I still rarely ever eat it. I HATE pistachios and anything with the word pistachio in it. Same thing with coffee. I hate coffee. Oh! The thing that drives Mr X nuts? I hate steak. He says it's un-American. I say it's more steak for him. And so on and so on. Point is, I have food issues. In that there are many things I won't eat. Some simply because it smells funny. Or maybe I don't like the color. Or it looks like it's looking at me.
But jello? How bad could that be? I'm sick, there's very little I really want to eat. Jello? I thought I could handle it. The first bite was chewy. Not like hospital cafeteria chewy. I mean like taffy would have been easier. And it was kind of bland. But eh. It was jello.
Then I looked down and saw It staring back up at me. Waving it's little dark ends at me. Mocking me for thinking I could eat something and keep it down. 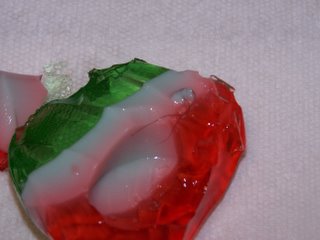 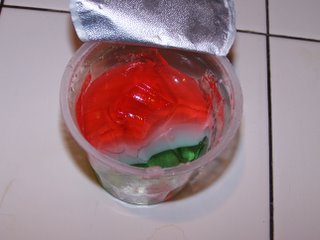 That? That is a thick black hair. In the middle of my jello.

Screw you Bill Cosby. There will never be room for Jello here again.