After I moved to WA 8 years ago, I found this little blue dress with all my other stuff. I didn't realize exactly what it was until my sister sent me a bunch of my old pictures and I found one of me as a 1 year old in this little blue dress. Some day I may actually remember to scan and upload said picture but for now.. It looked something like this only more 70's-ish: 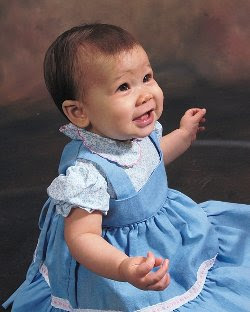 She blows raspberries into her arm and thinks the noise is just hysterical. She has no problem amusing herself! 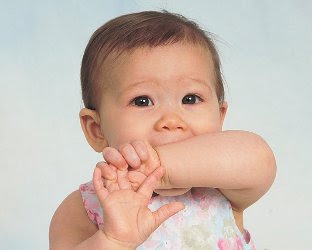 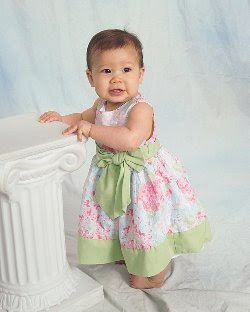 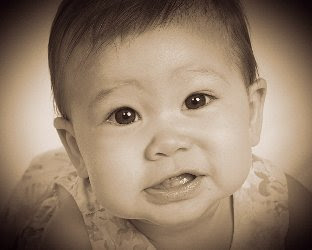 She's still the easiest baby. I expect her to turn into the mother of all nightmares by the time she turns 3. It's just the way it works with us. For now though, I'm loving every moment. Even the poo-filled ones because it gives me a reason to laugh at myself (not that I really needed more of those).

*I want to be 10 again. Not for long. Just one day. I want to be 10 again so that I can go to Bre's school for carnival day and be brave enough to go down this slide. I want to slip into a bathing suit and get all soapy in the kiddy pool and take a running leap at that long wet stretch of plastic. I want to slide and spin my way to the bottom. I want to slam into the pooled water at the bottom and feel it spray out and over my head like a big fan. I want to fall into the arms of my bff laughing because she is just as soaked as I am and dude! That was awesome! And I want to run back up the hill laughing, dripping and slick, excited to do it again, talking strategy and whether it's better to go straight down and therefore faster, or to spin and get a little dizzy. I want to talk about how if you turn just so right before you get to the bottom you can hit that puddle and really send up a big splash.

But it's just as amazing to watch her instead. To wonder at how she can be mine but actually have the guts to do this and to catch it on camera. For a moment I got to see who she is when she isn't with me. 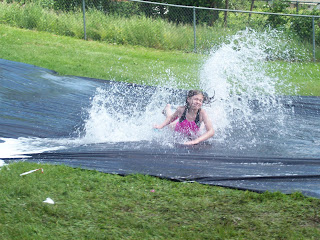 Next year Bre will be in 5th grade. It should be her last year of elementary school. Instead she'll be going to a private school. We had talked about sending her and for us it was an easy choice. It's more structured and strict, something she thrives on. There's a uniform and better discipline but also added cirriculum that she can't get anywhere else. We asked her what she wanted. We went on a tour of the school and she was quiet. She saw the computer lab, the classrooms, met some teachers, saw the science club's work (she loves science) and the sports they offer. When we left, she turned and said 'Yes.'

And now, as excited as I am for her, I'm also a little sad. She's leaving all of her friends. She's leaving the familiarity and safety of people who already know and like her for a whole new school. A smaller school. I don't think it really hit her until today when we left for the last time and she started to cry.
And I did too.
I remember her first day when she was too shy to speak. She used to sit away from everyone else (3 feet back) during storytime. This is where she struggled- and thrived. I'll miss it too. I'll miss being a part of it in the small way that I was.

*Today was the last day of school so I thought it would be nice if I picked Bre up at the end of the day. As the bell rang and the kids filed out to their busses, I noticed that about half of them (and every kid from my daughter's class because her teacher was just that amazing) were in tears. They didn't want to leave! I wanted to shake them and yell at them "You have 2 and half months of glorious freedom! Play! Swim! Eat lots of ice cream! It's summer!" Seriously kids, the only people who should be crying right now are your parents because they are staring down 2 and half months of no school and wondering how they are going to occupy your time so that you won't drive them ape-shit. Or maybe that's just me.
Posted by Mrs.X at 9:56 PM 7 comments: