What a way to start NaBloPoMo! Originally I thought I would ease into how stupid I can be but eh.... why bother. Regular readers already knew it anyway.
I was in charge of Girl's Halloween party at school. This meant I had to tell people what to bring and what to do. Yes! Being bossy! I am awesome at that! I sent notes to the parents who had volunteered to send things about what to bring. I organized little goody bags for the kids. I made up a special bag for Hurricane so he wouldn't be bored sitting there since the teacher said it was fine to bring him (I think really it was because I was the only one willing to actually take charge of the party and we don't have anyone we can trust to leave him with nearby).
I get there and start setting things up for the kids.
And there are 6 extra containers of cookies, 3 extra trays of cupcakes and 4 extra bags of candy. In my head I went on a little tirade about why the hell did I even bother since obviously no one read the damn notes anyway. Then I bagged the extras and set them aside for the teacher to use as bribery. I mean, rewards. For later. Right.
So we go on with the party and it's fine. The kids are full of sugar and hyper. Hurricane ate a cookie, then stole some kid's cupcake. Kid shrugged and went to get another one. I distracted Hurricane with blocks. 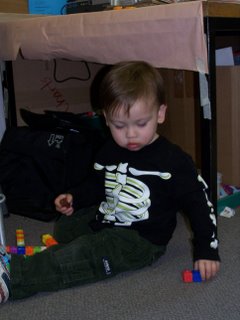 See? All is well. He ran for the door a few times but there was always someone nearby to block his great escape.
Girl begged to be allowed to ride the bus home and I let her knowing that Joe would be home to let her in. I started to clean up and slowly, the room emptied out. After everyone was gone, I noticed Hurricane standing near the door looking at the books. I bent down to pick up my bag, turned around and.....

Girl's school has an open layout. There is a long outdoor hallway with a larger building to one side that holds the office, library and a few classrooms. On the other side of the hallway are several pod-like buildings with a classrooms. In each pod there are 4-5 classrooms and a door at each end. There is a separate building for the gym and another for the cafeteria. There are also several pods on the far side of the library building. The playground is at one end of the building, the parking lot at the other.
We were in one of the pod-like buildings in a classroom by one door.
I came running out of the room and he wasn't there. There was a kid and her parent standing by the door but they hadn't seen him come out that way.
I started searching classrooms with the teachers in there looking at me like I was crazy. But I was starting to freak out. There were too many places to hide. And he was fast. And school had just let out and there were so many cars he could have gotten into or been run over by. I searched the bathrooms and ran outside.
It was then that someone asked me what was going on and it was then that I cursed myself for not asking for help sooner. It had been about 60 seconds since he had run out of that classroom and no one had seen him. 60 seconds and counting that I didn't know where he was.
Soon, every teacher on campus was searching for him. I ran out to the playground knowing he had been out there before and loved it there.
It was empty.
I ran back toward the buildings, my chest was burning. My hands were shaking.
I felt like throwing up.
I ran back into the pod I started from to recheck. Make sure I hadn't overlooked him.
One teacher rolled her eyes and yelled at me that he wasn't there and she'd already checked 6 times.
I bit my lip to refrain from cursing her out. I didn't have time to waste berating her.
I ran back out into the hall and started for the parking lot. My knees were shaking. I didn't want him to be out there.
Then, just as a teacher was telling me they had found him, I heard over the loudspeaker "Attention. We have one very angry pirate in the office. Would his mom please come and get him?"

I wanted to cry.

The principal (!!) had found him behind the gym building (which is the toddler equivalent of from Seattle to Jupiter)playing in the dirt. He was none too pleased to be taken away from his treasure and even less happy that it was a strange man taking him away from his prize.
When I walked in he was asking the principal for cookies.
He saw me and smiled like this was a normal everyday sort of occurrence (For feck's sake I hope not!) and waved. Waved!
Of all the nerve! Run off, scare the pants off me and then wave as though this is nothing?
"Mama!"
Yeah. Thanks kid.

Now, please. Spare me the 'it could happen to anyone' bit. Because people? This is not the first time these teachers have had to search for one of my kids.

I am now the parent who loses her kids. I am the parent they have to call on a regular basis because her kid can't figure out how to not let go when she gets to the top of the monkey bars. I am the parent of the kid that caused them to have to send a letter home to the other parents because her kid developed scarlet fever and went to school for a few days before she realized something was wrong. I am the parent of the kid who ended up going to the hospital in kindergarten because of their super slide (even though it was totally Girl's fault not theirs) and then they had to field calls on the safety of the playground equipment.

This is the point where I throw in the towel and start sending in a ringer for PTA meetings.

She can claim I'm just the nanny. She should be organized, capable, commanding and have eyes in the back of her head. She should be able to teleport just as easily as Hurricane can. She should know exactly how to handle Girl's tween rebellion. She must be willing to deal with someone so incompetent, she regularly loses her kids.
Apply here.

On the plus side, trick or treat was great. I thought Hurricane would freak about all the costumes but he loved it. Joe told me (I stayed back to hand out candy) he said trick-or-treat and thank you at every house. He cried when it was time to come home because he wanted to keep going. They managed to get to the house that hands out the big candy bars. 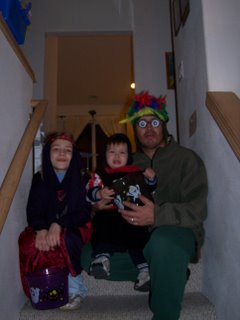 Girl was Elizabeth, Hurricane was Jack Sparrow and Joe was supposed to be a parrot but I think he looks more like an escaped mental patient with a feather fetish. 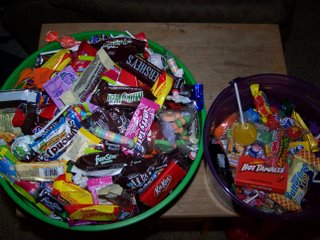 And of course, as it is every year, we ended up with more candy than we started with.