When I was little, my grandma used to treat us with animal crackers. I loved those little red circus boxes. I'd line them up and make the animals perform. Those were the Best. Cookies. Ever.
So when I handed some to the kids I was fully expecting the same reaction.

Instead I had Bre asking me where the sprinkles were and what about chocolate chips? Didn't I know the true value of a good chocolate chip cookie? With sprinkles? What was I thinking?
But she ate them and agreed that they weren't the worst thing I had ever made her try.

David was quiet. He sat and stared at the animals and just.... stared.
I was sure that he would soon be off and running leaving behind a pile of animal crackers, untouched and unwanted. I went back to cleaning the kitchen and was soon thrilled with the little growls of a toddler and his imagination.
In a few minutes he ran off to play with his big sister and I went to see what became of the animals.
It was then that I came to fully understand that yes, I had a boy. Not a toddler, certainly not a baby. A boy. 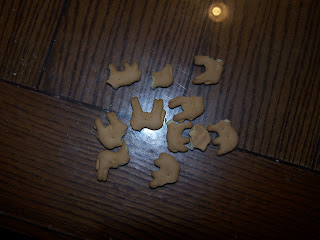