That's One Down and A Million More Forgotten Promises To Go!

I often make vague promises to post about something that happened or one of those stupid things I did before I started blogging (what? I don't do stupid stuff now. I have no idea what you're talking about). Um. (shut up). But as with many things, I lose interest or, more honestly, I forget about it. And then one day I'm hiding presents in the back of my husband's side of the closet (hey, it's the one place he'll never look) and I'm confronted by the condom tie and I slap my forehead and think 'Crap!' and then I take a picture of it. Because somewhere back in my archives I remember making vague promises to post the picture of the condom tie I gave my husband for Christmas from our daughter.
And now, for those who may be just joining us and those who like to hear over and over again just how stupid I can be (Hello Shovel Mole people! Yes, that pops up in my searchy stuff). The story of the Christmas My Husband Got a Condom Tie For Christmas From Our Daughter Because I am Stupid. And Blind. And Should Maybe Not Be Allowed to Shop Without A Chaperon.
One Christmas season long long ago (ok, it was only 6 years ago. Not the point) I asked Joe what he wanted for Christmas. He jokingly said that he expected some really hideous tie from Girl.
So I made it my mission to find the ugliest, most horrifying tie in the known universe. And I tried. Really, really hard. Except that it wasn't happening. And sales people are all "get lost" when you start asking them to show you their ugly ties and not the ones on this display rack because they are ugly, yes, but just not the kind of ugly that makes you want to hurl. Pardon me? Don't you have any ties that light up and maybe have a built in siren and if it could be like, fluorescent green and orange plaid well that would just be awesome!
But they didn't. And I got many an odd look (more so than I do on any given day at least).
So I wondered into Spencers.
You know what Spencers is right? It's that store in the mall with all the strobe lights and it's dark and full of gag gifts and things I would not want my kid to play with.
Kind of sets the alarm bells going doesn't it? The sort of store that should have told me that the tie I found was not appropriate to give to a man from his child.
But it didn't.
I did mention I'm stupid right?
It wasn't until Joe opened up the tie, in front of his mother, and asked why his daughter was giving him a condom tie for Christmas that I realized my error. Huh. Maybe that's why his mom has always kind of not really liked me very much.
So, here it is. 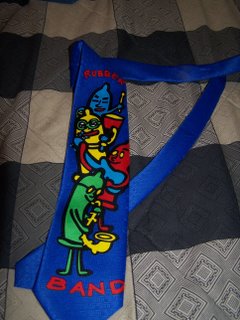 In my defense, I've been pretty vanilla when it comes to condoms (good grief!). Except that one time Katie gave me some novelty condom but it turned out to not be a good thing because it was pink polka dots and that's just not sexy.