When it comes to parenting, I admit that I rarely know what I'm doing. My guideposts are a little screwy. On one hand, there was my mom. I think that's one can of worms that I can skip opening. I did just clean my kitchen, you know. Let's just leave it at.... no help there.
On the other hand, there's my dad and stepmom who are awesome. And I now know just what kind of parent I want to be when my kids are adults. Which? So not very helpful at the moment. Because I think they key here is actually making sure that they get to be adults. Preferably all in one piece and healthy. Reasonably happy and working would be nice. Clean criminal records would be a bonus.
In the meantime. Huh. So that's where I was.
Here's a confession.
I wing it.
Yup. I pretty much guess. In some cases I think about what my mom did or would have done. Then I do the exact opposite.
For the most part it's worked out well but it's not without it's faults. Most of the time Girl X doesn't care that she's going to get in trouble and does what she wants anyway. And by trouble, I think I should point out that I am not one of those parents that think it's punishment to take away tv for an hour.
Girl X came home from school one day after a particularly bad week to find her room empty except for her bed and a dresser. That helped for awhile.
It's a work in progress and I can see it's getting better.
Still, most of the time? I feel pretty wonky.
And then there are moments where instinct takes over and everything is perfect.
Hurricane is surprisingly easy to put to bed. It took nearly a year, but I can now put him in bed awake and leave. He will be asleep before I make it down the hall. Or at least well on his way.
This day, he had woken up an hour earlier than normal. He normally naps for 2 to 3 hours in the afternoon. This time he barely made it one hour before he was up and raring to go.
By bed time he could barely keep his eyes open. He didn't want his story. He didn't look around as we walked down the hall, opting instead to lay his head down on my shoulder and sigh. I set him in bed, said good night and left the room.
He screamed.
I tried warm milk. On those rare occasions he has been sick, this has soothed him.
He didn't want it.
I tried to hold him.
He kicked.
Something clicked in my head.
With the lights off, we rocked in his room. I softly sang a lullaby I have sung to him since before he was born. (And in my head I could hear him going all Simon Cowell on me but I said 'Bah!') He quieted and turned to look up at me.
I looked at him.
We rocked and I whispered the lullaby.
He was asleep in a moment.
I kept rocking with him, happy that I had somehow figured out what this over-tired bundle needed.
It won't be long before rocking won't solve what ails him.
It won't be long before instinct becomes more complicated with him. I'm seeing that now with Girl X.
When those moments come, I will remember rocking with him in the quiet dark of his room. Breathing in his sweet freshly washed hair and feeling his warmth and weight in my arms.
And, as it does with Girl X now, it will carry my through.
Posted by Mrs.X at 10:18 PM No comments:

We took the short people to the park this weekend for the first time this year. Hurricane has been here before but he has the memory of a gnat (I wonder where he got that from...... What was I saying?) and so every visit is like the first. He hopped from slide to swing to tunnel to I don't know what that thing is and back again. He is fascinated by the big yellow tunnel that most of the other kids ignore. With all the slides and swings and climbing thingies, who can blame them for ignoring the plastic tube that sits off to the side like a big yellow turd? But for Hurricane? It's a place to hide from everyone. A place where parents don't fit and can't reach. A place he can go to eat bugs and we can't stop him. Yay for the big yellow turd!
He liked the swings. I think he misses his. 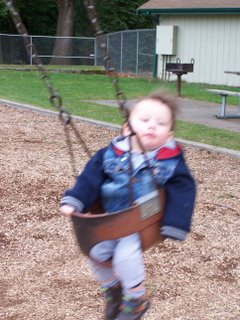 Spotting the big yellow turd, complete with yummy dead bugs. (He only ate one before he realized how not like a cookie it tasted). 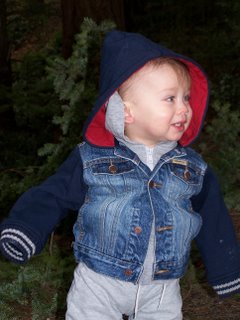 And Girl X on some random spinny pole. I think she was trying to fly. 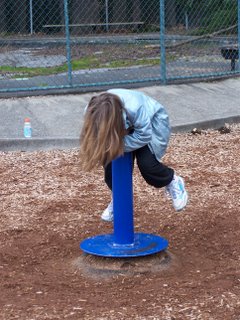 He wants the yellow turd but can't escape the parental grip. 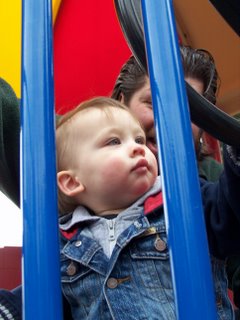 After the park we had to stop at Target for a few minor things. Hurricane spotted a ball about half his size and fell instantly in love. For the next 20 minutes as we walked through the store it was to the hushed and fevered chant of 'ball'. Such longing in that word. We caved. Even Girl X couldn't resist when she saw those puffy lips curl and he threw all 23 lbs of his tiny body over that ball. He sighed with such relief it made us laugh. Our little drama king.

Lately, he has been asserting his need for privacy.

We were playing in the living room when he suddenly got up and 'ran' (something where his body tries to catch up with his feet) behind the dining room chairs. I went over to see what he was doing and got The Look *patented 6/2005*. He had squatted down put both hands up. All he needed was a good book.

And indeed, it is stinky.

And as of this weekend, his new favorite place to do the 'tinky', is in the big yellow turd in the park where he can dine and grunt undisturbed.