This was just one year ago. He was 6 weeks. He was really that tiny. 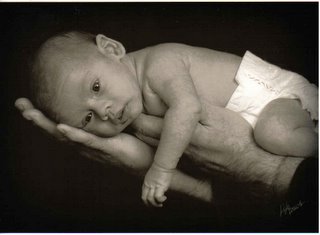 He weighed 6 lbs 7 oz at birth. 3 weeks later he weighed 5 lbs 7 oz. At the time of this picture he had just barely topped 7 lbs. He sounded like a kitten when he cried. Mostly he just eyed us all with this intense stare.
It always amazes me how quickly they change. To go from this tiny, completely helpless, fragile person. To the Tower of Terror, capable of flattening unsuspecting cats everywhere.
I've forgotten who we were before him. It was the same with Girl X. It just seems that he's always been here. So when I realized the date, and realized that under different circumstances I'd be talking about my 2 year old, it seemed more surreal than I could have imagined. I still wonder who they would have been. Yet, at the same time, I cannot imagine Baby X as someone else. I think it's how I've accepted what is now, and not what it could have been.
****************************

I can't tell you how many times I've heard "Oh, (insert number here) is my favorite age!" and always for different reasons.

I haven't found my favorite age yet. I love the newborn period. Multiple night feedings and all. I don't mind the sleep deprivation.

I love it when they get more mobile and learn to roll, crawl and walk. Each discovery is like a miracle to them. You can see it in their eyes everytime they do something new. "Ha! Did you see that? I am AWESOME! Next stop, the world!"

I love the terrible twos and threes. For the temper tantrums because come on, it's pretty funny that someone under 4 feet tall and all of 30-35 lbs can stop everyone and command their attention simply by throwing themselves down, screaming and pounding their little fists. It's even funnier to see their reaction when you do it right along side of them. Not that I've ever done that or anything. And the things they say and do.

One morning, I think Girl X was 4, she decided to make oatmeal. I was asleep as it was 5 am and I had no idea she was up. But she didn't want oatmeal. No, this was for Cat. Because Cat likes oatmeal. Except that she couldn't reach the bowl. So she just used the drawer with all the handtowels and dishclothes in it. With the dishclothes and handtowels still in it. But Cat didn't like the peach oatmeal. So she dumped some blue Blue's Clue's applesauce in it. Because Cat prefers blue oatmeal. Except that he doesn't. I don't know about you, but there isn't much more I could do but laugh as I washed all my towels and dishclothes and cleaned blue oatmeal out of the drawer.

When she first started school, she'd come home every day very excited about the things she had learned that day and the things they were going to do tomorrow. But when I'd ask her what it was that she learned or what they were doing the next day? "I don't know."

And now, my pre-tween. Attitude and all. Wild imagination, great with stories, loves her brother to the point that she will actually let him play with her prized possession (a Mickey Mouse she takes everywhere and uses to scare away bad dreams). She's temperamental, but sweet. She's smart but gets bored so easily. She's silly.

I haven't found my favorite age yet. I love them all. I'm looking forward to what comes next with her.

And I can't wait to see what Baby X makes in my towel drawer for Cat. I just hope he doesn't put Cat in the drawer.