Random Weird Things Around My House

So I finally got around to taking pictures for Jenny and I realized that maybe the weirdness is subjective. Yes? Because while I may find the fact that we have a roll of John Wayne toilet paper on display in our living room perfectly normal, others may.... not... so much. Yes.
So, I had already sent her a picture of John Wayne. Those who have been with me from the beginning or whoever it is that keeps poking around in my archives (hey, let me know if you can find my mustard vs ketchup post OK? Thanks.) may remember that this painting has cost me much angst. 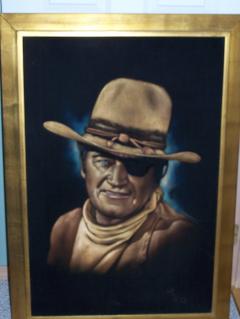 Felt. Angst. Woe. I hate looking at this picture because I know I promised to burn him and put him out of his misery but instead he is sitting in his closet facing the wall.

I did, however, end up getting a better idea of who Jenny is when she asked if this was from a pirate cowboy movie because that would be... you know.... like. Good. That and the zombie thongs pretty much seals her fate. She's a perv. And I love her for it! 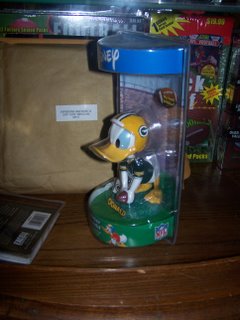 Anyway. Donald Duck, the Packers bobblehead thing that my husband refuses to let me take out of the package and mess with. Bobbleheads freak me out. As in, I cannot pass one when it is moving. It gives me the creeps. So maybe the bobblehead isn't so much weird as I am. 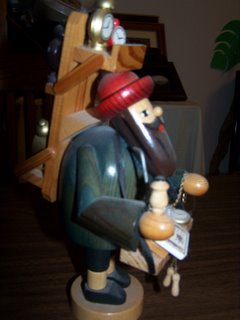 This. G-d. I don't even know how to explain this. Or why we still have it. It's an incense burner my sister got me in Germany. But I don't burn incense. I haven't used incense since I was in high school and I didn't want my parents to know what I was really up too. And you can't really see it but there is this perfectly round little hole in his mouth where the smoke is supposed to come out.
What is a backpacking clock-maker with a pepper mill smoking these days? 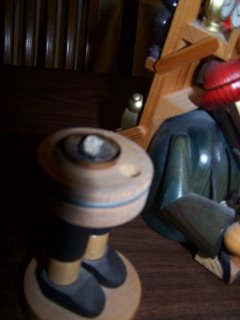