5 years ago today we stood on that ugly patterned carpet and promised to love each other for as long as we lived.
It seemed like a joke. You, the eternal bachelor and me, the odd ball mother of one odd ball daughter.
And yet, somehow, it worked. 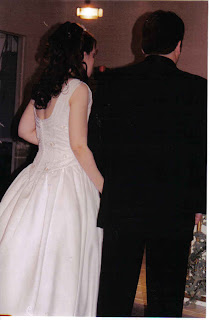 I'll never forget seeing you by the minister looking like a statue. I don't think you blinked once. That's ok though. According to the video I blinked for both of us. In fact, my blinking on that tape has made for a great get-drunk-quick drinking game.
We both had so much to learn about what it really meant to be married and I don't think either of us can deny that the first year was awful. But we got through it and the second year tested our ability to really be there for each other.
And we were. And still.

There are days where I want to rip all my hair out because of something you've said or done that makes me bonkers.
And then you lean in to smell my hair, or you touch my hand as you pass me in the hallway, or you reach over to rub my expanding belly and somehow, I forget what I was annoyed with you about.
Because those sweet moments far outweigh the ones where you've left your wet towel on my side of the bed. Again.

When I'm upset with my sister you listen but never attack her even though I know that she's not your favorite person. You have no idea how much that means to me. Because even though we have a difficult (at best) relationship, I would feel the need to defend her if you said something awful about her. I love that you get that absolutely ridiculous side of me.

The night we met, when my sister married your brother, I knew there was something.
At that time, Breanna was wary of every man she saw (with the exception of my brother and father), but she loved you on sight. And when you spent half the reception playing on the floor with her and a bucket of ice, I knew she was right.
There was something very good and so right about you. 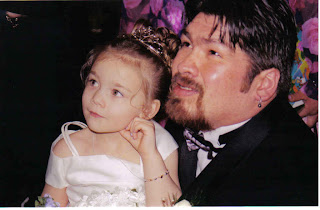 The best part of marrying you has been watching you be a father. It doesn't surprise me that I can't put into words here what this means to me. You already know because we've spent long nights talking about it. You already know what it has meant for Bre.
You knew the first time she called you 'Daddy'.
Happy Anniversary Joe! 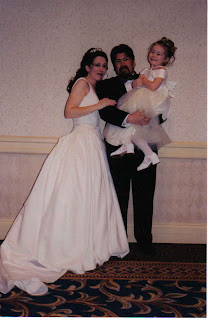